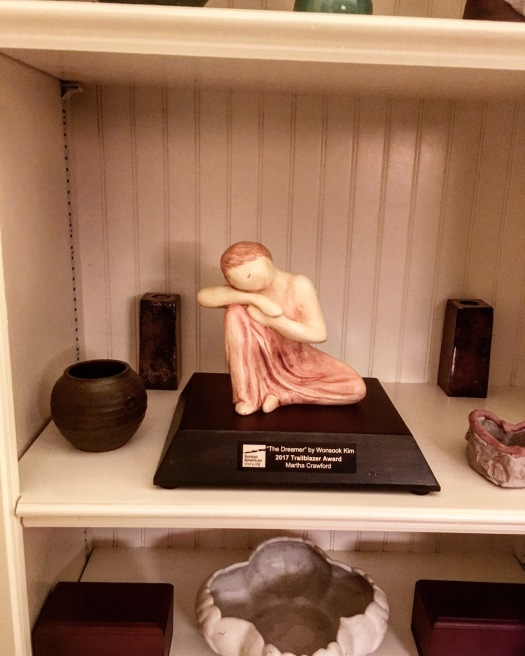 Artwork: The Dreamer, by Wonsook Kim

I was recently asked to share my story at the Korean American Story Gala, where they kindly honored me with their Trailblazer award. I didn’t respond to their kind invitation for almost two weeks – and spent most of that time planning to say “No thank you”  concerned about what it meant to be “honored” as a white adoptive mom, who is too often on the receiving end of “God Bless You’s”  from the Korean American community, that I have not earned.  I have come to understand these “bless yous” as the expression of the complicated feelings, the wound, around adoption that exists in the Korean community. I eventually decided to  accept the award, and  try to talk about what it means for me as a white adoptive parent, to try to bear witness to  the losses that the adoptee community and the Korean community contend with when they encounter each other – and to speak to  my responsibility and complicity in that. I sweated hard over this five minute speech, trying to walk a fine line of naming what I have seen, and knowing my place.

Here it is:
Just before we traveled to Korea to adopt our son, I sent an email to the clerk of the small Quaker meeting in Seoul, to ask about their meeting times.

He wrote back and said that he would meet us at the airport.

And for the next 10 days we spent some part of each day with Bongsoo: He drove us to the DMZ, and the folk village, we went to museums and met his wife and children, we went to dinners together and to Quaker meeting. We had animated discussions about social justice, reunification and Western imperialism.

The night before David and became parents we met Bongsoo for dinner at the spinning restaurant on top of Seoul Tower. And he looked at David and me and he said, point blank:

I didn’t know if it was the revolving restaurant or Bongsoo’s question that made my head spin so violently.

But then I realized that his challenge was an invitation, not an insult.

So I looked at David, and then I took a deep breath, and I said to Bongsoo:

“I promise that we will do our best to answer your question in all honesty, but will also do the same for us? Can you tell us more about why you haven’t considered adoption and can you explain why you believe that there are so many Korean children adopted by foreigners?”

And we proceeded to have one of the most formative conversations of my life. It was not easy, it was full of hard and uncomfortable moments of challenge for all three of us, that undermined many of our perceptions about ourselves and each other.

And fortunately, it also forged a life long friendship between our households.

And afterwards I realized that it was an inherent part of my responsibility as an adoptive parent in an interracial Korean and American family to accept any invitation, no matter how challenging or uncomfortable, that would help me to better understand my children’s experience as Korean born Americans and as adoptees.

This invitation, issued on the eve before motherhood, made it clear to me just how pervasive, how unchallenged, and how oppressive the narratives of white adoptive parents are.

– and how the stories of white adoptive parents too often drown out adoptee voices, first family voices, and the voices of the birth nations and birth communities.

I decided to do whatever I could to listen, and learn, and maybe, if and when I was invited, to support adoptees and the Korean community in building a world where the voices and perspectives of Korean adoptees, – my children’s voices – would be valued and legitimized.

I received other transformative invitations over the years: When my 5 year old son invited me to create “an adoption class with only adopted people in it” I accepted the challenge– and extended it to a group of adoptees and adoptive parents – this invitation grew into All Together Now – and we constructed a space where adopted children define their own experiences, and adoptive parents listen and learn from adoptees.

Or several years after that, when Joy Lieberthal Rho asked me to meet her for lunch and invited me to help her to support Sejong Camp – and I became a part of Sejong Cultural Education. As a result I spend a week each summer at a Korean culture camp, where I am the only white person, and the only adoptive parent. Each summer I try to sit still and quiet and listen and wait for the campers and counselors invite me in: to soothe a child who is homesick for an adoptive mother, to offer support to a queer teen coming out to their Korean parents, to help an adopted adult find an effective way to confront their white parents about their experiences of anti-Asian racism…

But above all it means, as a white adoptive parent, that I must discern:

I do not always read these signals as precisely as I would like to: there have been many times when I’ve gotten excited about a project or a problem and Joy or Ben, or others have reminded me, with great kindness and patience, that I am a guest, in a sacred space that was constructed for others.

As my daughter and son now move into their adolescence, and claim their own space in the Korean Adoptee community, it is especially important for me to be still and move further back, and wait – to see if I am invited

Remembering that as an invited guest, the stay is both conditional and temporary.

And the best guests are the quiet ones, who clean up their own messes, and are sure not to overstay their welcome.

Thank you Korean American Story, for the invitation.